When an old man in a white dressing gown visits your city, it’s usually not something many people will take note of. In this case though, people made a hell of a fuss about it. Well, to be honest, he wasn’t exactly wearing a dressing gown and to be even more honest, he was also the Pope, so you could kind of see where all the excitement was coming from (or could you?).

Anyway, yes – the Pope has come to visit Prato, the city I live, about two weeks ago and I was really meaning to write about this.

The people of Prato had been talking about the upcoming visit for weeks, if not longer (I remember that by the start of my internship in September, my boss already announced the high visit to us in a „There’s so much awesomeness going on in this sleepy little town called Prato so you’d better be impressed“ kind of voice).

The fact that they covered the city in posters with Papa Francesco’s friendly-smiley face weeks before the day of his arrival wasn’t too impressive, I mean people do that for any random rock star too, right?

But honestly, what kind of rock star do you have to be to have all the bakers create a new special type of the city’s typical cookie (the genuinely famous cantuccini) to celebrate you passing by for an hour? I mean, come on! That is the real stuff. Not to mention that the icing they covered the cantuccini in halfway was to make the cookies resemble the white and yellow Vatican flag. My being impressed by this tremendously welcoming gesture might be slightly exaggerated here because they were giving me Pope-cookies for free when I noticed them in the display case at the wonderful bar of my choice (that you shall surely read more of some time in the near future).

So anyways, the city was being excited, all the schools would be closed, whether it made sense or not. Just to clarify that, some schools were sort of right beside the way that Papa Francesco passed with his ridiculously fast popemobile thingy – therefore: makes sense to close them off that day, no one will be able to reach them anyways. The school where I teach is at least 5 kilometers from the city center and I’m sure none of the very important city representatives would allow the important old man to come anywhere close to this blemish of an industrial zone this educational establishment is located… different topic! Anyway, does it make sense to close this school for a whole day because of an official event that takes place for one hour, super early in the morning? Well, yes because Italy.

The day of the visit, everyone in the city seemed to be up before the sun, everyone was swarming towards the city center and onto the Piazza del Duomo before it was even 7 am. Slightly confused but all the more excited kids, weakish looking old couples supporting each other, surprisingly tipsy ladies in their fifties who seemed to love being back to the days where you could shamelessly “WOOOO” at a celebrity like a teenager – everyone was gathering in the piazza, waving Vatican flags and holding onto balloons with not only a huge company logo on them, but also the ever-smiling portrait of the Holy Man.

After a spectacular arrival scene at the nearby stadium including a helicopter and the said race mobile, my attention soon started to fade. I might have taken a Pope-selfie with my friend during this period, but for the sake of my integrity let’s just say I might also not have.

But then, amongst all the saintly words that I will admit I couldn’t care less for, he started some serious earth talk that made most of the people around me nod their heads in grim agreement. Prato is a city of almost 200.000 of which at least 30.000 are Chinese, although their number is supposedly significantly higher as many of them are illegal immigrants not registered anywhere. This not exactly noteworthy city in Tuscany has the third largest China Town in Europe (only after Paris and London). And in this area, there are thousands of so called “fast fashion” factories, where Chinese workers produce low quality, low price clothing under partly unbearable conditions. Of course, the controversies around the topic of exploitation and modern slave labour are a weak point of the local authorities – and I loved that Francesco, whom they had all welcomed so flatteringly in their city, used this occasion to speak blunt and outright about the tragedy that has occurred here in February 2013: Seven Chinese died when the factory they worked and lived in caught fire at night. Tragedies like these are caused by human exploitation and they will not stop until we treat each other like human beings – these words from the top of the balcony really impressed me somehow. It needs some nerve to hold the mirror up to your hosts like this. I liked that.

If everyone else did, I’m not too sure. Most people disappeared almost as quickly as Pope Francesco did and didn’t even have time to take their Vatican-coloured trash with them. I clearly heard a lady complain about how she “had expected to receive a blessing” that apparently he didn’t issue. But I for myself can only say that it wasn’t just and only geographically that I had come closer than ever to the commander-in-chief of the catholic church that I usually can’t be bothered with. 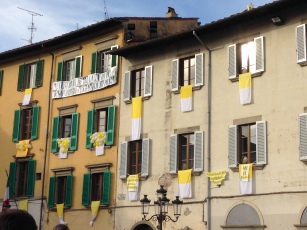