When started writing about this topic, I realized I had way too much to say to fit everything in one massive piece of blog post. What should you bring, what should you be prepared for, what should you know before traveling to Myanmar for the first time? So many questions I wish someone would have answered to me beforehand – let’s dive right in then, shall we?

Lots of mosquito repellent. These flying bullies will be around and they will try to ruin your holiday by giving you some shitty diseases at worst and some crazy itchy bites for sure.

You won’t find as many during the day, but they can be the nasty ones too, so make sure to protect yourself, especially if you’re prone to always be the one with the most mosquito bites such as myself. Dressing modesty is your way to go anyway, and it helps with the mosquitoes, too.

I found that sleeping bags really helped as well. We chose really light cotton ones with a fibre specifically designed repel insects, but I have no idea if it was that or just the fact that we had our bodies covered with whatever. To be honest, we brought the sleeping bags as an alternative to possible dirty sheets, but turns out they were much more useful the other way: Clean beds every night, but only two of them were equipped with a mosquito net, so yeay for being accidentally prepared!

Get your vaccination shots. I just said it, the possibilities to end up with some nasty shit and ruin your health are real and you should be prepared. Talk to your doctor about the recommended vaccinations and make sure to actually get all of them – or at least enough of them to make you feel safe. When my doctor asked if I wanted to get the vaccination against rabies depending on “how much I would interact with animals” I was like – errr, how do I know?! Sure, I didn’t plan on volunteering at an animal shelter or anything, but I found it really hard to estimate the potential risk of encountering an animal with rabies, so to be sure, I got the shots anyway.

Feeling safe is really important to me and I know I would have been worried otherwise. But honestly, from all the stray dogs and whatever other animals I saw in Myanmar, I didn’t feel threatened once, so I’m really not sure if that was a necessary one. But hey, it’s about feeling safe, isn’t it? That being said, there’s a lot of shitty diseases around that no vaccination on this earth can protect you from, so again: just cover the fuck up and don’t let those bully insects bite more than necessary!

Small change, especially when hiking. When we made our way down from Golden Rock, we were stopped multiple times to leave donations on small shrines, which felt more like a road toll to be honest because the sites were ON the road instead of along it, so you basically had to pass through them. We didn’t mind really and the people were super friendly, but I’m sure it would have been more than awkward to ask for change there.

Don’t worry too much about:

Water. By that I do NOT mean drink it, or brush your teeth with it or casually open your mouth in the shower cause that’s what you do. No. Not a good idea. As you probably know, the water in many countries is fine for the locals because their system is used to the water, while it’s absolutely not fine for unprepared tourists’ guts.

In Myanmar, from everything we heard, even the locals don’t drink the water as it is. So why do I say you shouldn’t worry too much about water then, when it’s clearly not drinkable for anyone? Exactly, that’s why. The Burmese don’t drink it, so they won’t offer it to you either. If they don’t wash their salad with it, why would they wash your salad with it? Get my point? I know having drinks with ice or eating raw vegetables is a no-no in many countries with unsafe water, but we didn’t have any trouble with it in Myanmar.

Music choices you would find wise. ABBA on the bus while bumping along a rural road in the middle of nowhere? Super loud trash techno beats plus karaoke style singing on the paradisiac beach, also for hours and hours? Silly boy band songs when visiting father of the nation General Aung San’s impressive former study in Yangon’s House of Memories? I’m talking Westlife’s “When you’re looking like that” by the way. I won’t lie, all three of these examples happened. 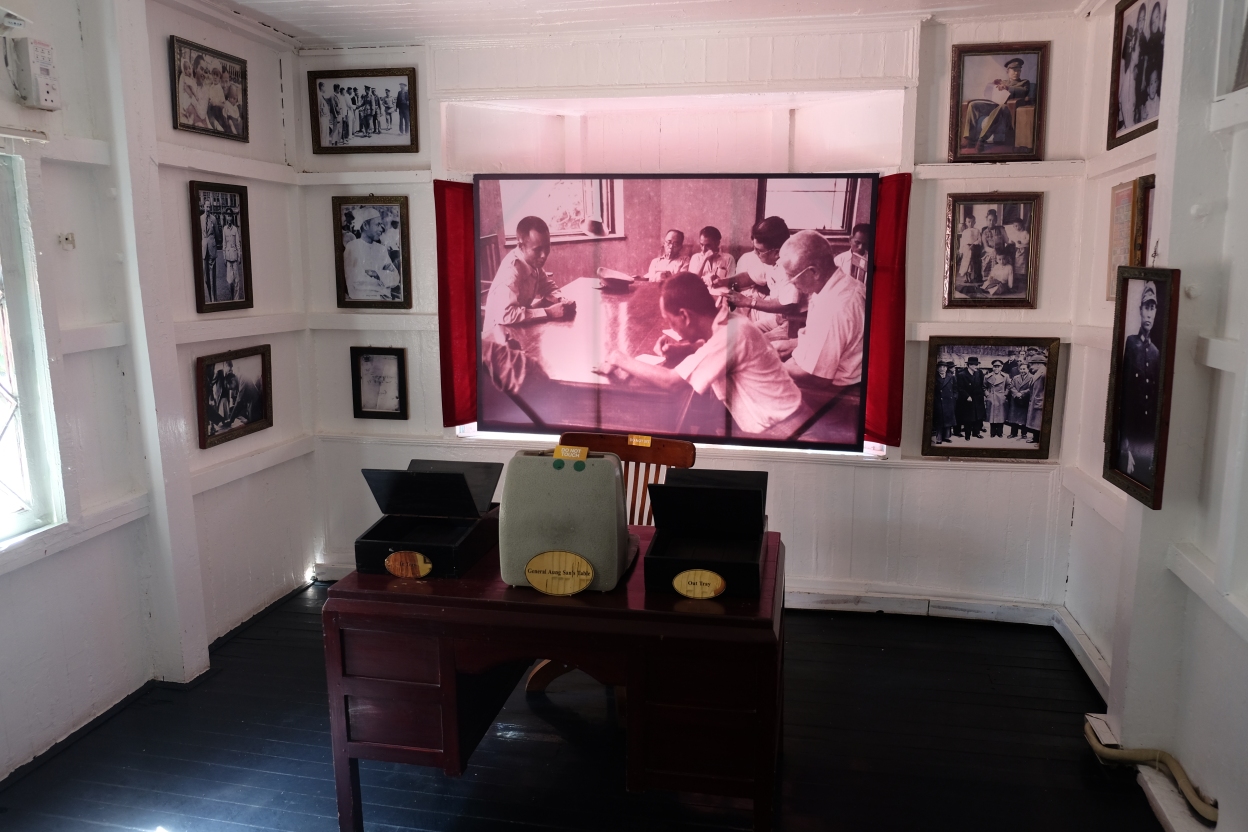 Pay admission fees. Everywhere. Myanmar’s tourism industry is still small in contrast to other South-East Asian countries, but this is definitely something that has evolved by now. In areas or places of specific interest for tourists, for example the Shwedagon Pagoda in Yangon, Golden Rock in Kyaiktiyo, the areas of Bagan or Inle Lake – you will pay. Most of these fees are rather small, let’s say around 10 US dollars, but they add up. I’ve read of many visitors trying to somehow sneak around them, but I don’t think that’s cool and wouldn’t do it even if I had any idea how to. If you have enough money to travel around that country, you have enough money to pay those 10 dollars.

In even less developed areas such as a the Mergui Archipelago (southern most part of Myanmar) with it’s delicate beaches, countless islands and fascinating nature, it seems necessary to have a special visitors permit which can cost around 100 dollars apparently?! I’m just starting to research into this for a future trip we’re planning to take (yeay!). If someone has any info they can share on that matter, hit me up!

Expect to be confused about:

Train rides. Especially, buying train tickets. We wanted to travel from Yangon to Bagan by train and had even looked up the train times and everything from home on this amazing website (this guy really knows his train travel). But what we hadn’t found out prior to our trip was that it can be hard to actually get access to train tickets. We wanted to buy our tickets for said trip on our second day in Yangon, but because we didn’t want to go just that day or the day after, but like three days later, we could not do it at the actual train station.

By the time we finally understood that, we’d already spent a significant amount of time walking from one counter to the other in the train station, possibly annoying all the people working there. Then after a while we were pointed towards an office outside of the train station where you could buy all the tickets for everyday further away than the next, but by the time we actually managed to find said place, it had already closed up for that day. Sigh.

We ended up being a little bit pissed, we just wanted TRAIN TICKETS MAN. Out of despair, heat and confusion we then ended up buying super over-prized tickets for a bus to take us to Bagan instead. To be honest, we did get ripped off with the prize, but we ended up traveling way more comfortably than on the train – or at least that’s what everyone who’s chosen the train instead told us. Either way, just know that there’s different places to buy tickets for today and tomorrow than for anytime further away. Could have saved us a whole afternoon to know about this.

Would I recommend taking the bus for long journeys in Myanmar? You bet! It’s a super efficient system, punctual, cheap (if you don’t act stupid like we did), and actually way more comfortable than busses I know from let’s say Germany – think blankets and snacks and shit. Just out of curiosity, I’ll still take the train next time.

Be also confused about:

Tipping. I still don’t understand if this is customary in Myanmar or not. Following our (still not well-informed) guidebook, we thought it was and always tipped as we felt was appropriate but have received VERY different reactions to it. A girl at one of the hotels we stayed even refused to take a tip I offered her out of sincere gratitude after she’d gotten rid of a gigantic spider in our room. So honestly, about tipping in Myanmar, I really don’t know. I’d say just go with your gut feeling really. We might not have been acting right all the time, but I think as long as you’re smiling and thanking people, you won’t really offend anyone, even if they don’t want your money. Any ideas on this?

Your medications with you. I’ve talked about health issues quite a bit, but let me just add one more. I know that pharmacies exist in most places of the world and I know bringing half a drug store isn’t exactly packing light, but for heaven’s sake, please bring emergency meds that you will want to have on yourself at all times. Sometimes it’s just not cool to wait until the next pharmacy opens in the morning to get that thing you really need in the middle of the night. You know, like when red marks suddenly start appearing on both your and your travel partner’s bodies after fucking midnight and you’re kind of panicking here?! But you also kinda forgot to bring allergy meds?! It’s not fun. Don’t be us.

Your drivers license, cause you won’t need it anyway. That goes for your international license as well, because they’re not accepted in Myanmar. The only way you’re going to drive is an E-scooter in Bagan, and nobody will bother to ask for your license from everything I experienced.

An adapter for your electric plugs – that is, if you’re traveling from Germany. Sorry I can’t be helpful for other nationalities and their funnily set up devices, but if your plug looks anything like you could make it fit into a pig’s snout, you’ll probably be fine.

All the things. I’ve touched on it before concerning water quality, we haven’t had any food-related problems for the whole three weeks of our stay. We’ve tried our share of the Burmese cuisine and liked most of it. While we’re both meat eaters, we just went for the vegetarian options when a place felt a little dodgy to us and have been doing fine with that. I know many people who got sick in Myanmar and we were probably just lucky, but I think common sense is your best friend on this matter (and most others in life?). If a place doesn’t look right to you, maybe just eat elsewhere. Worked for us every time!

An amazing stay. This post might have sounded like focusing on some negative parts of traveling on Myanmar, and yes, there are things that I think are good to know and be prepared beforehand, but most of all I think that Myanmar is an incredibly beautiful country, with the loveliest most helpful and friendly people, stunning sites, a rich culture, amazing nature and a mouth-watering local cuisine. I wish everyone enjoyed their time there as much as we did – so to make sure, I wrote this post and also this post to help you guys out. Let me know what you think in the comments! 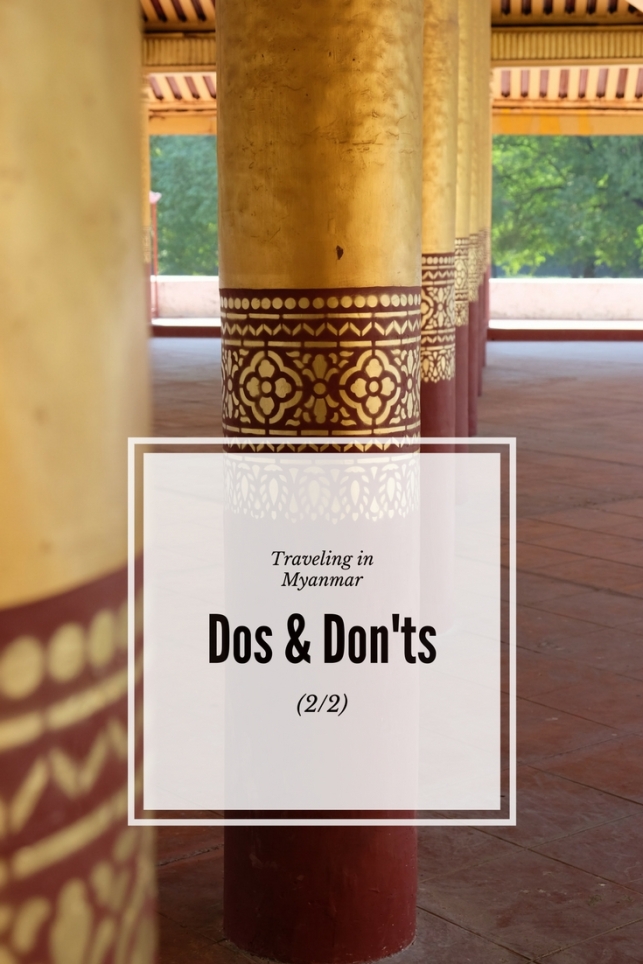 2 thoughts on “Mingalabar Myanmar (2/2): What to do, bring, eat and expect traveling Burma”